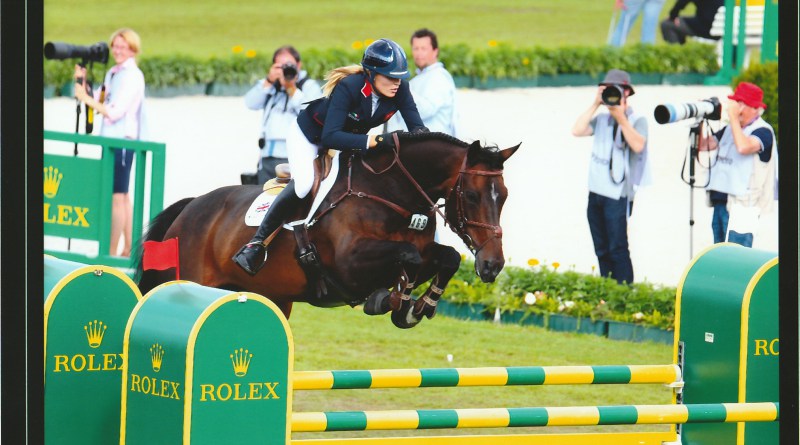 The following article is from The Mixed Zone sports magazine, written by Eleanore Kelly:

With the advent of an Olympic year, The Mixed Zone will be publishing a regular series of articles highlighting the sportswomen striving to compete at the summer Games in Brazil. We start along the Road to Rio with teenage showjumper Jessica Mendoza, who experts predict could be one of the breakthrough stories of the year ahead

When athletes chasing Olympic selection say they don’t really feel the pressure, they are either lying or extraordinary. We will have to assume the latter for teenage showjumper Jessica Mendoza, who flatly contradicts the laws of nature when she insists: “I don’t really feel the pressure or nerves. When I go in the ring I’m just thinking about going as fast as I can and keeping the fences up.”

Mendoza has a gift with horses and riding that pitched her into the British showjumping team at the tender age of 19. She made headlines when her performance at the European Championships helped GB secure Olympic qualification. Her fellow riders rave about her nerves of steel. But Mendoza knows her talents and has a self-belief that some might call arrogance.

However, the girl with the arresting looks is also quite reserved in conversation, almost shy in that non-PR-managed way you find so seldom in sport. This may change in time. But at the moment she is exactly what British sport needs to rouse the younger generation: a female icon who scoffs Maryland cookies and is as image conscious as the next teenager, but above all has made the sacrifices in pursuit of dreams and success.

Di Lampard, the British team manager, acknowledged Mendoza’s preternatural calms before the European Championships. “It may seem crazy to select someone so young, but this girl is so cool, focused and unbelievably determined. She rides with no fear and is an out-and-out winner.”

If Mendoza keeps her place in the team through to the Olympics, she will join a group of high-profile young showjumpers in Rio who are changing the face of a sport once considered the preserve of older riders. These glitzy newcomers include Jessica Springsteen, daughter of rock star Bruce, Microsoft founder Bill Gates’s daughter Jennifer, and Athina, granddaughter of shipping magnate Aristotle Onassis. All are hoping to secure Olympic places in their respective countries’ teams.

Mendoza has her own backstory of similar proportions. Her dad Paul is a successful businessman who made his millions in a number of movie-related ventures including the Harry Potter franchise. Today he acts as his daughter’s manager and trainer. “We bicker sometimes because we’re so similar,” she says. “I know how much he wants me to win and if I make a mistake or have a bad day, he’ll just get in his car and drive home to watch the football.”

The family wealth has clearly not been converted to a life of glamorous ease. Yacht-hopping and designer shopping are conspicuously absent from her c.v. Instead, at the age of just 18, Mendoza moved ‘Team Mendoza’ (mum Sarah, dad, the grooms and all the horses) to Eindhoven, a damp part of Holland that happens to be the Mecca of showjumping. The intention was to raise the bar by competing alongside the best riders in the world. It also meant her horses were not subjected to hours of travelling to compete on the European circuit. “It used to involve at least eight hours of travelling for them when we lived in the UK,” she explained.

Mendoza’s competitive career began at the age of seven. She enjoyed success in the pony and junior classes, winning two team golds at the European Pony Championships in 2011 and 2012, and three successive British junior titles.

She has repeatedly risked life and limb, once ending up in hospital with broken ribs and a punctured lung after falling from a horse. Yet nothing can quell her desire to be “the best showjumper in the world”. Chasing the dream has meant riding and training every day and missing out on friends, parties, shopping and a normal teenage lifestyle.

Showjumping is a sport where men and women compete alongside and against one another, and where riders can still dominate well into middle-age. The British team won gold in London 2012, but it was an all-male line-up. It was ever thus. There has been no woman on a GB Olympic team for more than 50 years. With the Whitaker dynasty still at large in the sport, plus world No.1 Scott Brash and former world No.1 Ben Maher still churning out impressive results, it has been a squad that is near-impossible for newcomers to break into.

The pre-Christmas London International Horse Show at Olympia was one of the last big shows for selectors to assess riders before Rio. And it was there that Mendoza made her presence felt. In an astonishing display of guts and determination she took the Christmas Cracker Stakes on the Friday night. The crowd gasped when the teenager was the only rider to pull off a dare-devil turn in mid-air and beat off 29 other riders, including Brash and no fewer than 16 former Olympians.

Other riders copied but none could catch Mendoza and the aptly-named Spirit T. There was an anxious split-second when the mare rattled a jump, but they continued clear and dashed over the last jump without so much as a hesitation or pull of the reins. “Everyone was going so quickly, I knew I had to do something,” Mendoza said after her round. “I planned to do the turn but when I actually went in the ring on my horse it looked a lot worse and I thought, ‘Can I do it?’ But I knew if I didn’t, I wasn’t going to win.”

Mendoza continued to nudge team selectors with a second place the following day when she had just one jump down in the title class, the Longines FEI World Cup. “I have my eye on Rio, but I need to keep jumping consistently with Spirit,” she said.

It was her first year competing in the senior classes at one of the high spots on the equestrian calendar, and she certainly left her mark. “It’s amazing to be here,” she said after leaving the ring at Olympia. “It’s a really nice feeling to be competing in front of your home crowd, everyone cheering for you. When I did the turn, I could hear the crowd gasp and then clap.”

Mendoza made her message clear: she may be young, she may be glamorous, but she can play just as tough as the rest of them. She can take on and beat the top riders in the world. Now for Rio.

Eleanore Kelly is a multi-media journalist who competed in three-day eventing at elite level. She runs an equestrian business in Hampshire and still has a burning ambition to compete around Badminton. At present her role as an assistant producer for the BBC has to suffice. Eleanore’s latest articles.